Goin’ on a Wombat Hunt

Nick is a professional wombat hunter. OK, really he’s a friend of Maggie’s who grew up in the country and volunteered to lead us on our quest to see a real, live wombat. We knew we were in wombat country because we’d seen ample “evidence”.

We grabbed our torches (Australian for flashlight) and hit the trail in Thredbo. With Nick as our guide, we saw scads of wombat scat, bushels of wombat burrows, and tons of wombat trails. We wacked our way through the bush in the moonless dark. But, alas, this is the closest we got to seeing a wombat.

We spent 3 nights in Thredbo (the Australian “alps”) with a bunch of Maggie’s friends… 11 adults and 13 kids in one giant ski lodge! It was loosely controlled chaos, but tons of fun! Unfortunately, rain was forecast the entire weekend, with a huge storm expected the second day. So we took advantage the first day and headed outdoors. Robbie’s only goal for the entire trip was to ride the bike park at Thredbo, so he rented a bike, body armor, and a helmet, and hit the slopes. He planned to ride until the trails became unrideably muddy. C and I decided to summit the highest peak in Australia, Mt. Kozciosko! The first part of the arduous trek requires a gruelling ride aboard the chair lift to the trail head.

So far the weather was cooperating, with only a mild Seattle-style drizzle. But as the morning progressed the weather deteriorated. The 13.75k track consists of a metal grate elevated above the native vegetation. In dry weather, it’s easy to walk. In wet weather, it becomes a bit slippery. But we were determined to make it to the top. The surrounding environment was beautiful. We’re told the view was equally beautiful, but this is all we could see: 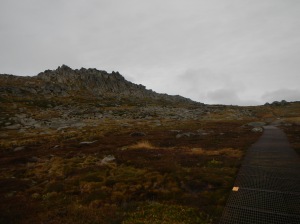 We hiked into a headwind the entire way there, and finally made it to the summit. After two icy, windy minutes at the top, we began our descent. We decided that this will be the only one of the Seven Summits that we will be attempting!

We were grateful to have the wind at our backs on the return trip, as we were now thoroughly saturated. We met up with Robbie at the lodge at the top of the lift. He was covered in mud and having a blast. After a quick cup of hot chocolate, we boarded the lift for the frigid trip down to the village. We attempted to hide from the wind behind our soggy backpacks, but I’m not sure it did much good.

Shortly after our return, the sky opened up. In the next 36 hours we got over 3” of rain!

Needless to say, the next day was spent at the Thredbo Leisure Center partaking in indoor activities.

Guess who’s behind that splash…

Before our departure, O organized an intense paper airplane contest. 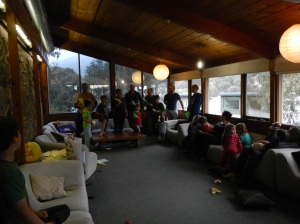