We haven’t been doing much exploring lately (intrepid or otherwise) due to our all-encompassing need to get the Twinkie livable.  I promise we’ll get back to regular posts soon!  But in the mean time, I’ll share a little more Twinkie fun.

One of the unexpectedly lovely features of the Twinkie is this window:

Who thinks pink tinting is a good idea?!

Apparently the previous owner didn’t like the tinting but didn’t have the wherewithal to actually finish the job of removing it.  It took almost 3 hours, but yesterday I managed to get all of that nasty pink off the window.  My hand is cramping, I’m wearing 2 band-aids, and I blew through 8 razor blades, but now it looks like a normal window!

Robbie tackled the daunting task of removing the Parrothead, Ron-Jon, and various other stickers from the Plexiglas window in back.  I just couldn’t go through the rest of this trip having people think that we’re Parrotheads!!  No offense to actual Parrotheads…

Speaking of windows…  Since I don’t have access to a sewing machine, our budget doesn’t permit custom window coverings, and I don’t want to be flashing my fellow campers, I had to improvise curtains.  I ironed hems into fabric, pinned them, then hung them using clips on café curtain rods.  Eventually I’ll hand-sew them, but in the mean time, we have to be careful not to impale our hands with the dozens of pins in the curtains.

And now the moment you’ve all been waiting for….pictures of the interior!!!  OK…I think Mom and Katie W. are the only ones who’ve actually been waiting for pictures, but the rest of you have to bear with us. 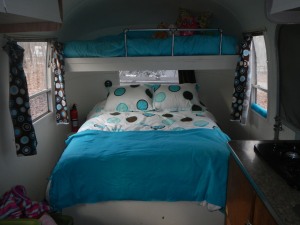 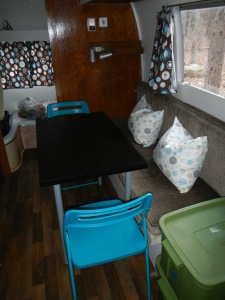 I know you’re all really impressed with the picture of the bathroom, but rest assured…the toilet works!  Unfortunately, neither Robbie nor I relishes the job of figuring out how to use the black-water tank, so for now we’ll keep the Pee-Pee-Ti-Pi close at hand.  And we have no shower plumbing, so the mangled old tub will serve as storage.

Starting Date:  You never know when we might show up at your door!

We were ridiculously fortunate with the timing of the Twinkie’s delivery.  Not only did my aunt and uncle graciously accommodate us in Columbus, but they provided tools and assistance in building a few things that weren’t done by the refurbisher.

Then we returned to Charlotte to stay with Robbie’s sister for a few days while we bought furnishings, cleaned up 50 years of dirt, and completely re-organized our mobile lifestyle.  We’ve been staying with Suzy and co. while try to figure out where everything goes in our new home.  And we’re really lucky that we don’t have to sleep in the Twinkie because it’s a total mess!

Of course, when you’re an Intrepid Explorer, nothing can go quite as planned.  When we picked the Twinkie up in Ohio, it was frozen solid.  We returned to NC and spent the night at Suzy’s house.  The next day, we visited the Twinkie to show it off to Suzy and the kids. 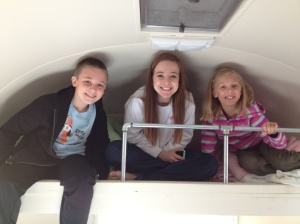 The cousins testing out C’s bunk

We were surprised to find a small puddle of water in the middle of the floor.  We didn’t have time to find the source, so we mopped it up and hoped it was just a little water left over from the installation of the new water system.  No such luck.  When we returned later, there was a bigger puddle that had run into the sub-floor!  We started searching for the source of the leak and found that the brand-new plumbing was leaking!!!  We’d been told that the water system was empty, but this was obviously NOT the case.  We stuffed towels around the leak and called an RV repair place.  They came out and removed the water tank with the faulty plumbing.  The next day, they returned to install it.  After almost 3 hours of messing with it, they realized that they had accidentally glued shut the opening to the water tank!  So out it went again.  After another night in the shop, it’s finally leak free.  Unfortunately, when the water runs, the pump causes some sort of horrible vibration that makes it sound like a machine gun is going off in the trailer!  But that’s a problem for another day…

It’s here! It’s here!  It’s finally here!  Last Thursday, we picked up our Airstream!  We spent 9 hours on Wednesday driving from Charlotte, NC to my aunt and uncle’s house in Columbus, OH through fog, rain, mountains, and even snow on our quest to retrieve our hard-sided home from the refurbisher.  When we stopped for gas, C and I took advantage of the snowy weather to have a tiny snowball fight:

The Sunday before we left, I placed an ad on Craigslist in Columbus hoping we’d find someone to buy the pop-up.  If we couldn’t find a buyer, we’d have to find a storage place and bribe one of my cousins to sell it for us!  But we got lucky (monumentally lucky), and on Thursday morning, the pop-up departed for it’s new home in West Mansfield, OH.

As soon as we sold it, we drove another 2 hours north to pick up the Airstream.  Robbie and I were terribly nervous as we approached the shop.  We’ve only ever seen this thing in pictures, and we knew it would still need a lot of work.  And we were right!  As we looked at the inside, I commented to Robbie that we would never be in need of another project;  we can probably work on this for the rest of our lives!  But it’s spacious on the inside, and we’re happy with the changes we made to the interior.  It’s going to be a great home for the next 5 months!

We’re grateful to my Aunt Barbara and Uncle John for letting us stay with them during our excursion, as overnight temperatures in Ohio hovered in the mid-teens.  We’re durable, but no sane person camps in 16 degree weather!

While we were there, we decided to spend a couple of days exploring Dayton, the birthplace of aviation.  Aunt Barbara joined us on our excursion to the National Air Force Aviation Museum, 3 hangars chock-full of vintage and modern aircraft including my favorite, the B2 Stealth Bomber.  It’s hard to say if this museum or the National Naval Aviation Museum is cooler.  One can’t go wrong with big buildings filled with airplanes!

The next day, we visited the Dayton Aviation National Historical Park.  We saw the world’s first airport: the airfield where the Wright brothers puzzled together the secrets of controlled, heavier-than-air flight.  There is a mockup of the rail and pulley system they used to launch their aircraft, and I was surprised at how small it is. 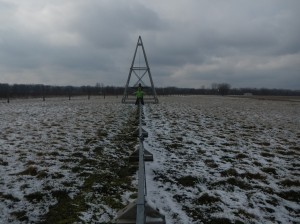 Then we visited the bike shop where the Wright brothers did most of their tinkering.  It’s impressive to see how much they accomplished through methodical experimentation and mechanical innovation despite the fact that their formal education ended in high school.

Though it was a crazy few days, it was great fun to spend time with my aunt and uncle and my cousins whom I haven’t seen in years!

When I first started this blog, one of the things I worried about was having bathroom facilities.  During our travels through Louisiana, we stayed in a campground where the bathroom was 1/3 mile away from our campsite.  Robbie solved this problem by commandeering an empty orange juice container so that he didn’t have to leave the trailer when nature called.

But C and I lack the aim required to utilize Robbie’s “toilet.”  So we visited our local WallyWorld to procure a small funnel.  I present to you… 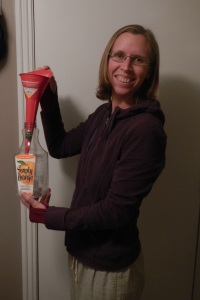 This contraption has been sitting unused through the last 5 states.  But yesterday we hit our first gnarly rainstorm since Zion.

We arrived in Congaree National Park to drizzly rain.  The forecast looked grim, so we took advantage of a break in the rain and popped up the trailer.  Then we donned our raingear and hit the trail.  Congaree is a swampy forest of old growth hardwood and cypress.  Though the trees can’t compare to the sequoias  of California, the park contains some of the tallest hardwood trees in the US.  Hiking through it in the rain felt both mystical and a little haunted.

That evening, the sky absolutely opened up.  The rain was bad, but even worse was the 3” deep, un-traversable lake in front of the port-a-cans.  As bedtime approached, the rain got worse.  We could brave the rain and the giant puddle, but it was cold and we were finally dry.  After brief discussion, we decided that it was time to christen the Pee-Pee-Ti-Pi.  Robbie averted his eyes while C and I giggled uncontrollably, but it worked!!  And we stayed warm and dry!

Yesterday we entered our 15th state of this trip…South Carolina.  Don’t confuse this with North Carolina, which is also a Carolina but located slightly north.  That’s for those of you unclear on geography.  Anyhoo…

After a brief stop at the South Carolina Welcome Center for maps, we departed the interstate to take the backroads to Charleston.  Lucky for us, the backroads took us through Beaufort (pronounced Byoo-fert). It’s a small town filled to the brim with gorgeous old homes on quiet streets lined with moss-draped oaks.  It looked like a set designers vision of the old south.  We walked through this 300-year-old cemetery:

Is this place haunted?

Robbie and I were surprised by the number of fresh Confederate flags placed on numerous graves.  While I don’t begrudge the soldiers who died for the Confederacy, I wonder about the people who place the flags.

The next day we explored Charleston.  Walking it’s streets felt like taking a step back in time. More than once I stumbled on a raised cobble or flagstone because I was too busy staring up to notice the obstacle.  You know you’re in an old city when you encounter streets like this: 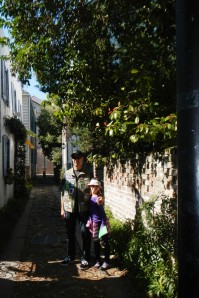 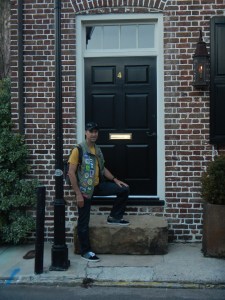 Someone built the street too low

The homes in Charleston are built on narrow lots with balconies and pretty courtyards between.  Most of the courtyards had signs stating “Private Courtyard.”  This house, however, took a slightly different approach:

We learned a lot about the slave-trading history of Charleston.  We toured the Old Slave Mart Museum which is in a building where slaves were traded when outdoor trading was deemed unseemly.  We learned that of the 12 million people brought as slaves to the Americas from Africa, only about 5% came to North America.  Of those, 40% passed through Charleston.  No wonder the first shot of the Civil War was fired here.

Speaking of the Civil War, C earned her Junior Civil War Historian patch from the National Park Service when we visited Fort Sumter (Union recipient of the first shots of the war) and Fort Moultrie (Confederate fort from which the shots were fired).