Today I hiked 12 miles with 3,000 feet of climbing.  This is significant for two reasons:
1) I had major hip surgery 3 months ago, and
2) I haven’t been able to hike this far since at least college!When I was diagnosed with hip dysplasia a few years ago, the surgeon also diagnosed me with severe femoral anteversion, an abnormal twisting of the femur.  This deformity is probably what caused the knee problems I’ve experienced since college.  The dysplasia was somewhat correctable with surgery, but I’m too old to correct the anteversion.

Since college I’ve been limited in my ability to hike downhill.  Usually after about 1000 feet of descending or 3 miles of flat walking, something gives out and causes an excruciating snapping inside my knee.  I’d given up years ago on any kind of long-distance hiking.

I had surgery in ’09 to correct the dysplasia, but unfortunately the results weren’t what I’d hoped for.  I tried every non-invasive therapy imaginable to try to reduce my hip pain, including learning a totally new way of walking that reduced the amount of compensation my knees and back did for my wonky hips and femurs.  But I still had too much hip pain.  So I went back for a second surgery 6 weeks before we left on this trip.  It’s still too soon to say for sure, but this surgery seems to have done the trick!

For the 4 days we’ve been in the Grand Canyon, I’ve been eyeing a trail that goes to a lookout point right over the Colorado River.  The trail is easily visible from the rim, and it called out to me every time we peered over the edge.  But at 12 miles and 3000’ vert, it’s unreasonable to expect C to hike it.  Robbie tweaked his knee on our hike down Kaibab a couple of days ago and he needed a down day to let it rest.  So we decided that today he and C would chill on the rim, and I’d tackle Plateau Point.  If my knee or hip started bothering me on the descent, I could turn around at any point.  But I really wanted to make it to that lookout!

I rose at dawn and started down the trail at 7am.  I packed enough food to be out all day and a headlamp in case I didn’t make it back before dark.  To make things interesting, my migraine from last night didn’t go away, so my head was throbbing like crazy.  I took a couple of aspirin and downed a Diet Pepsi, and thankfully it subsided within the first hour.  The trail descends all 3000’ in the first 4 ½ miles, then it’s an easy 3 mile round trip to the point.

The park service generally recommends that people allow two hours to ascend for every one hour of descent.  In my case, I descend so slowly that the ratio is closer to 1:1. Around 2 miles, I slipped, landed hard on my left hip, and tweaked a muscle already irritated by the surgery.  It hurt like crazy, but I felt confident that I hadn’t done any damage worse than the surgery, so I continued on.  By the time I reached the bottom of the descent, the pain had subsided, and I knew I’d make it to the point.  I hoofed the flat part and spent 30 glorious minutes soaking in the views from Plateau Point.  I didn’t want to dilly-dally, as I still had the climb ahead of me. 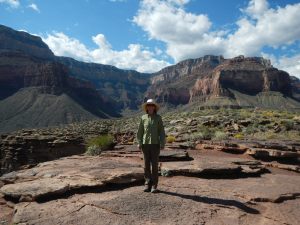 The view back up from Plateau Point 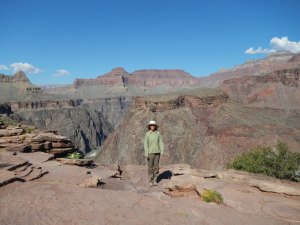 The guy who took my picture wasn’t much for composition

At 11am I started back up the trail.  I knew I’d make it back before dark, but I didn’t want to tempt fate.  I kept a slow, steady pace and stopped every hour to cool off.  The temperature in the lower part of the canyon was at least 85 degrees, and most of the trail is exposed.  I didn’t want to be one of those people who overheats and has to be rescued from inside the canyon.  I made it out of the canyon at 2:30pm, well ahead of my optimistic goal of 4pm!  And the best part is that I felt great.  Tired, but great!  C and Robbie met me a few minutes later, and we returned to camp for a well-deserved shower and a beer.

In addition to geology, during the last month we’ve been learning a lot about the Ancestral Puebloans, previously know as the Anasazi.  One of the things we’ve learned is that they relied on pinon pine nuts for sustenance during the winter. Ounce for ounce, pinon pine nuts have more protein than mule deer!  Although we’d seen many pinon trees, we’d yet to see a pinon nut.  But it’s pinon nut season in Grand Canyon!  They’re everywhere.  A couple of days ago we saw some, and although collecting anything in the national parks is illegal, we went rogue and each ate one.  Today we learned that we’re allowed to collect them.  So we decided to eat like an Ancestral Puebloan for dinner.

First we collected the seeds.  Here’s what they look like in the pine cone: 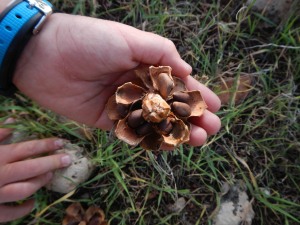 Pinon nuts in the cone 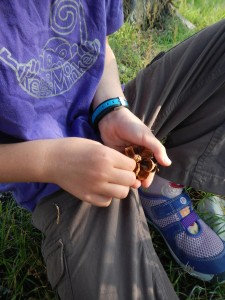 Extracting nuts from the cone

Thankfully, they litter the ground, so mostly we just collected them from the ground. 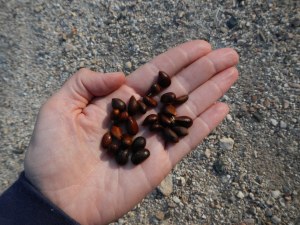 Pinon nuts in the shell

A local woman warned us to cook them, otherwise they can make you sick…good to know.   She also suggested roasting them in the shell as it makes them easier to peel. 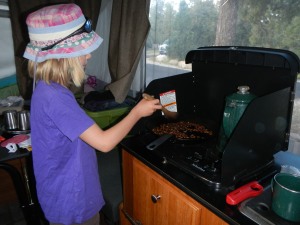 Apparently I had the temperature too high, because after a few minutes of roasting, they started exploding like popcorn.  Unlike popcorn, these spewed hot, gooey bits of pinon nut everywhere.  Robbie ran for a lid, I turned off the gas, and C ducked and did her best to avoid the shrapnel.

Next we shelled the nuts.  If you’ve never had the pleasure of shelling a pine nut, you’re not missing much.  The thin shell cracks easily, but you must be very careful to not mangle the delicate nut inside.  Robbie cracked the shells with his Leatherman, and C and I developed hand cramps pulling the tiny shells off.

After approximately 3 person-hours of labor, this is what we had to show for our efforts: 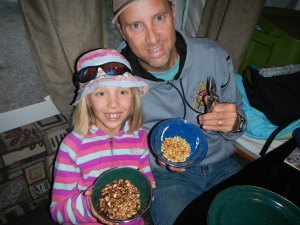 Shells on the left, nuts on the right

Admittedly, some of the nuts ended up in our mouths along the way, but that’s not a lot of calories for the effort.  I certainly hope the Ancestral Puebloans had a better method of pine nut extraction than we did!  Thankfully we had pasta, pesto and a spinach salad to go with our tediously collected pinon nuts.  As Robbie said “perfectly prepared Puebloan pesto pasta pleases people.”

Being good engineers, we had to stop on our way out of Vegas and pay homage to Hoover Dam.  By the time we got back on the road, it was pushing 3pm.  Just before 5pm we reached Kingman and stopped at the visitor center for suggestions on places to stay.  The man at the desk recommended that we continue on Route 66 another hour or so to an RV park at Grand Canyon Caverns.  It sounded nice to us, so we took his advice.  When we arrived at our anticipated destination, we found it booked solid with bikers (the long-hair, leather wearin’ kind)!  It was starting to get dark, but we had no choice but to continue on.  It took almost an hour to reach the next town.  We turned in to the first place that said RV Park, which turned out to be a strip behind a gas station.  But I had a raging migraine and we hadn’t yet had dinner.  So here we stayed.  Turned out to be a decent place to stay as long as you don’t mind the rumbling of trains all…night…long.  Thankfully they didn’t blow their horns or we wouldn’t have slept at all.

The next morning we finally reached the Grand Canyon!

-Big horn sheep from about 50 feet:  It left the cliff and came right up to the rim trail among the throngs of tourists!  We had no interest in tangling with those horns, but some people went right up to it!  Sadly we didn’t have our camera with us, so you’ll just have to take our word for it.

-Bull elk and his girlfriend:  This guy blocked our way out of camp and we had to wait until he saw fit to move on to greener pastures.  Again, we had no interest in taking on an animal the size of a horse with a rack as big as Dolly Parton’s (wait…wrong kind of rack). 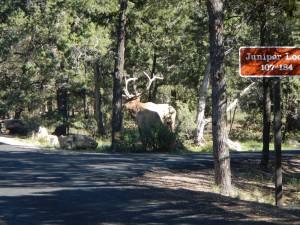 -Tarantula:  I almost stepped on it while looking at a bird.  C loved its fuzzy legs. 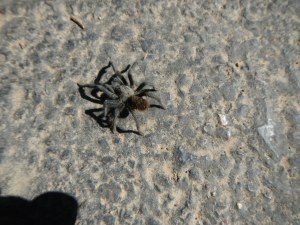 Glad this guy wasn’t in our tent

We did a great hike down the Kaibab trail today.  6 miles round-trip with 2000’ climbing.  C is such a good hiker now that she barely noticed the climbing.  When we returned to camp she spent an hour climbing trees! 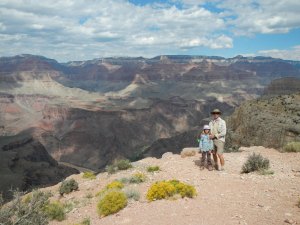 We learned today that you can tell the hikers from the non-hikers by the color of their shoes: 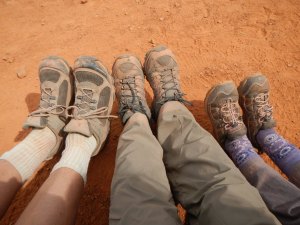 Yesterday our shoes were different colors

Today we leave Vegas, and we’re ready to get back to the campgrounds!  After spending the weekend with Libby and her kids, Dad and Jan, and Mom and John, I realize just how much I miss my family and friends!  C misses her friends, too, but a good dose of Gramma and Grampa certainly helped.  I think that’s the hardest part about being on the road.  We meet lots of nice people, but it’s not the same as spending time with friends.

But our weekend at the Hilton was a blast.  We only left the hotel one night for dinner.  C had a great time doing what she does best: 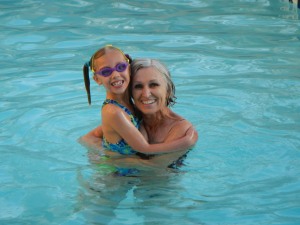 The fish and her Gramma

And Robbie and I had fun doing what we do best:

Vegas is an icky city, and I SWEAR I’m never coming back.  I mean it this time.  Really.

Here are scans (well, pic’s; the scanner can’t manage the steep spine of that journal) from the zion day, plus angel’s landing. //rd